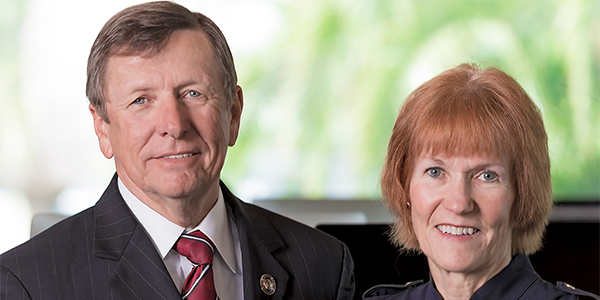 Half of the McCays' gift will be used to enhance academic programs at the Florida Tech College of Engineering and Science, and half will be used in support of the Catholic Campus Ministry.

"Many leaders steward their institutions for a few years and then move on to other opportunities, but the McCays have invested deeply in Florida Tech," said Robert Phebus, chairman of the Florida Tech Board of Trustees. "By creating this legacy, they have shown that the university is a core value for them."

The College of Engineering and Science has been on a steady rise to excellence and has earned its place as a cornerstone in science, technology, engineering and math (STEM) at Florida Tech and in global education. This gift will provide a significant building block for its future.

The gift for Campus Ministry will help ensure that students seeking community, prayer, service, leadership and fun will have an outlet for years to come. Florida Tech is fortunate to have a full-time minister and this gift will provide the resources for him and others to help students develop the strong values and moral leadership expected of true global citizens.

"Florida Tech has given a lot to Mary Helen and me, and we want to give something significant in the future," Dwayne McCay said. "This university is a special place. Philanthropic contributions help ensure it will remain so for many years to come."

Dwayne McCay has been president and CEO of Florida Tech since July 2016. He also holds a joint appointment as professor in physics and space sciences and mechanical and aerospace engineering. He came to the university in 2003 to serve as provost and chief academic officer. He was named executive vice president and chief operating officer in 2011.

Before coming to Florida Tech, Dwayne McCay served in several leadership roles at the University of Tennessee, including vice president for research and information technology for the UT System, and Alumni Distinguished Service Professor of Engineering Science and Program Chair of Engineering Science and Mechanics, and then CEO, at the University of Tennessee Space Institute.

He has been awarded 16 patents and is a Fellow of the National Academy of Inventors.

Mary Helen McCay is a University Research Professor and was a former NASA payload specialist astronaut.

At Florida Tech, she has led an interdisciplinary team of researchers focused on providing innovative solutions to the renewable energy sector. Since joining the university in 2003, she has generated over $4.5 million in funding, partnering with Siemens Energy to build a state-of-the-art thermal spray and high heat-flux laboratory. Her current research is directed toward testing and improving thermal barrier coating materials with the goal of increasing turbine efficiency.

Prior to joining Florida Tech, Mary Helen McCay was professor of engineering science and mechanics, chair of the Center for Laser Applications, and adjunct professor of metallurgical engineering and materials science at the University of Tennessee Space Institute.

She is the holder of two dozen patents and is a Fellow of the National Academy of Inventors.

"In making this meaningful contribution, Dwayne and Mary Helen are leading by example," said Gary Grant, Florida Tech's senior vice president for development. "As we encourage alumni, parents and friends to support our relentless pursuit of greatness, this powerful display of generosity shows that our president and first lady are personally invested in Florida Tech's success as a global leader in STEM education."

This is not the first time the McCays have displayed their generosity toward Florida Tech. Most recently, in 2017 they established two endowed professorships: the Bjornar K. Hermansen Ocean Engineering Professorship was named for the businessman, philanthropist and 26-year Florida Tech trustee who passed away in 2015, and the Junda Lin Marine Biology Professorship was named for the Florida Tech biological sciences professor and director of the Institute for Marine Research who passed away in 2016.