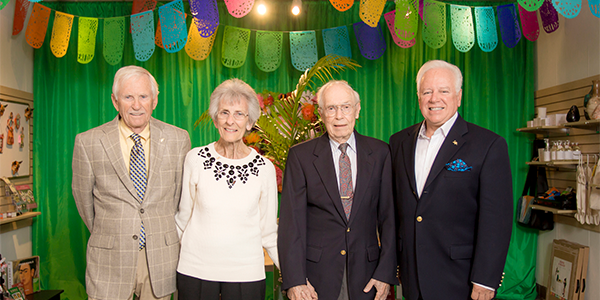 FUNDING FROM THE BOTTCHER AND MERTENS FAMILIES TO HELP ENGINEERING STUDENTS

MELBOURNE, FLA. - They have different backgrounds, life experiences and work histories, but the Brevard County residents Carl and JoAnn Bottcher and Lawrence and Margarete Mertens have one important thing in common: their desire to make the world a better place by harnessing the power of a Florida Institute of Technology education.

The university is pleased to announce two separate, $1 million gifts to its Create the Future campaign that will fund the Carl and JoAnn Bottcher Endowed Scholarship and the Lawrence and Margarete Mertens Endowed Fellowship.

Both endowments will assist students in the university's College of Engineering.

"From their vantage point as friends of the university, the Bottcher and Mertens families have seen the power and potential of a Florida Tech education," said university President and CEO Anthony J. Catanese. "We are honored and delighted that both the Bottchers and the Mertenses share our belief in the transformational impact our engineering programs can have on our students, the community and our world."

Each in their own way, the donors have experienced Florida Tech and seen its merits firsthand.

Lawrence Mertens worked with the university's founding president, Jerome Keuper, during the early days of the space program at the Cape.

"We are very impressed with the university's development from the tiny Brevard Engineering College we knew in the 1960s," said Mertens, an electrical engineer who worked for years on the Cape and was later named chief scientist at RCA. He served as an adjunct professor of oceanography at Florida Tech, as well.

"We'd like to see the fellowship given to someone who works hard and has the potential to make a real contribution to their field," Mertens continued. "We hope it will help someone who will make the world a better place in some way."

Carl Bottcher, who elevated the family-owned, Worcester, Mass.-based painting business his father started to one of the leading companies in the Boston area, with clients including Norton Company and Fidelity Investments, is eager to affect the future, too.

Bottcher has long worked with civil and electrical engineers, so a visit to the Florida Tech campus included a tour of the College of Engineering facilities in the Olin Engineering Complex as well as chats with Dean Martin Glicksman, faculty and students. The Bottchers attended the Senior Design Competition and, eventually, saw most of the campus.

"We realized Florida Tech has enormous potential to impact the way we live," Carl Bottcher said. Today's Florida Tech students are the innovators, entrepreneurs and scientists of the future and Florida Tech's 60,000 alumni work around the world and have a global impact on business, industry and innovation.

He later added, "My Dad gave so much of his personal talent to others and to the world. I want the recipients of this scholarship to give back from their knowledge and talent to society."

"The establishment of an endowment is a lasting legacy," Catanese said. "These two endowments are a testament to how well the Bottchers and the Mertenses understand that education is the most empowering gift a young person can receive."