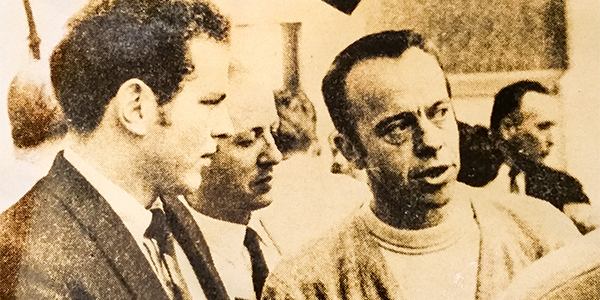 MELBOURNE, FLA. — David Kriegman, who earned two degrees at Florida Tech's College of Science in the 1970s, has made a scholarship gift to his alma mater and will include the university in his will, Florida Tech's Office of Development is pleased to announce.

The scholarship gift is for students who make a significant contribution to the Florida Tech student body or community.

"I believe in giving back. My years at Florida Tech helped me in both my professional and personal growth, and I learned not just from my classes but from participating in and contributing to campus activities," Kriegman said. "I want to encourage and help students in their total learning and growth experiences, and I want to demonstrate the rewards of giving something back to one's community."

Kriegman earned a bachelor's degree in mathematical sciences/computer science in 1970 and a master's degree in computer science in 1972. Now living and working in Virginia, he is president and CEO of Z2B, LLC, a consulting company that provides strategic and operational advice to help companies achieve their growth goals. He is author of Zero to a Billion: 61 Rules Entrepreneurs Need to Know to Grow a Government Contracting Business.

Kriegman spent 30 years growing and managing companies that provide professional services. After working for the U.S. government, he held a number of leadership positions in private industry. Those included: executive vice president and chief operating officer of SRA International, a $1.3 billion government systems integration company with 5,500 employees; president of Command Federal, a venture-backed company focused on the Internet of Things; president of Tech Team Government Services, a wholly-owned subsidiary of a commercial IT outsourcing company; and senior vice president and general manager of the Jacobs Technology Strategic Solutions Group.

At SRA, Kriegman's areas of responsibility included profit and loss (P&L), business management, marketing and sales, human resources, contracts and process improvement. Joining SRA when its revenues were less than $5 million, Kriegman was a member of the leadership team that grew the company to over $1 billion.

Before becoming SRA's COO, Kriegman led the establishment of SRA's information technology business with the U.S. Army and was the director of defense systems, which he grew from $48 million to over $400 million in seven years. While he was a senior manager at SRA, the company was recognized by Fortune magazine as one of the "100 Best Companies to Work For" and by Washingtonian magazine as one the best places to work in the D.C. area.

At Jacobs Technology Strategic Solutions Group, Kriegman had complete P&L responsibility for all aspects of that business.

He served as president of TechTeam Government Solutions, Inc. and led the sale of TechTeam to Jacobs Technology. While at TechTeam, Kriegman was responsible for all aspects of growth and P&L and for integrating four diverse acquisitions to fulfill TechTeam's strategic plans for growth in the federal market.

Prior to TechTeam, Kriegman was president of Command Federal, a venture-backed startup company focused on growing a business based on the next generation of internet technology. In this role, he became an industry leader and spokesman for Internet Protocol version 6 (IPv6) and the Internet of Things.

Kriegman began his career with the U.S. Census Bureau of where he served as a section chief in the Statistical Methods Division.

Kriegman is a frequent speaker at industry and corporate events and serves as a lecturer and adjunct professor at programs offered by the Defense Acquisition University and the George Mason University School of Business Executive Education Department, where he co-authored the course, "Tech to Exec: Making the Transition while Forging Stronger Client Relationships." He also helped develop, and lecturers on, the Executive Education course, "Building GovCon Acumen."